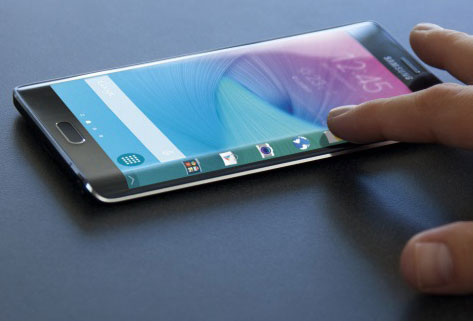 Samsung Galaxy S6 coming soon with Aluminium body and Dual Edge Screen.Now a days on web Samsung Galaxy 6 is hot topic and there are a lot of rumors showing its body  and shape but it is not yet confirmed and announced by Samsung officially. Meanwhile, Samsung also introduced its new series “Galaxy A” . A series smartphones are  full metal body handsets but here in this news we are going to inform you about a latest rumor present on an italian blog.

According to this italian news blog Samsung Galaxy S6 will be half metallic and curved (edge display like  Galaxy Note Edge ) as shown in below figure.

It is also expected that this rumor may hinting about Samsung Galaxy S6 Edge smartphone that will be launched at the same time when Galaxy S6 arrive in the mobile phone markets around the world.This rumor is got from a famous Samsung handsets predictions and news website Sammobile. According to sammobile Samsung will launch Galaxy S6 with a variant Galaxy S6 edge like Samsung Galaxy Not 4 and Samsung Galaxy Note edge.

Some of its famous Features are listed below:

It is expected that this cell phone will be hit European phone market in the first Quarter of next year.