Warning: Use of undefined constant SINGLE_PATH - assumed 'SINGLE_PATH' (this will throw an Error in a future version of PHP) in /home/pakmobil/public_html/wp-content/themes/news-pro/lib/pakmobile_functions.php on line 85

Warning: Use of undefined constant SINGLE_PATH - assumed 'SINGLE_PATH' (this will throw an Error in a future version of PHP) in /home/pakmobil/public_html/wp-content/themes/news-pro/lib/pakmobile_functions.php on line 89
 Samsung earn a record profit of 59 trillion for Third Quarter 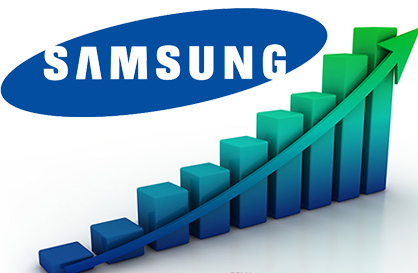 The company Samsung has announced the preliminary results of the last quarter. For the third quarter of 2013 the company once again strengthened its position in the market, exceeding expectations of equity analysts and received a record profit. At this time, it is estimated 59 trillion won, equivalent to about 54 billion dollars. Operating income thus amounted to 10.1 trillion won ($ 9.4 billion).[ads1][ads2]

Later, the final results will be announced, but it is clear that a company has demonstrated growth that allowed surpass the previous quarter, before which was considered the best in the company’s history. In the second quarter of 2013, operating income of 9.53 trillion won ($ 8.5 billion), and the total amount of revenue amounted to 57.46 trillion won ($ 51 billion). Another great looks separation from the result of the previous year. During the same period of 2012, Samsung was 52.18 trillion won, or $ 48.5 billion Operating profit amounted to 8.06 trillion won ($ 7.5 billion).[ads2]

Thus the average annual growth was more than 13%. Recall that at the end of the previous quarter shareholders have expressed displeasure with the results , but analysts had expected the suspension of growth in the segment of expensive smart phones, bringing the lion’s share of the profits of the company. Precise data on sales there, but it is clear that Samsung has not only managed to consolidate its success in the market, but also to continue to show steady growth.[ads2]