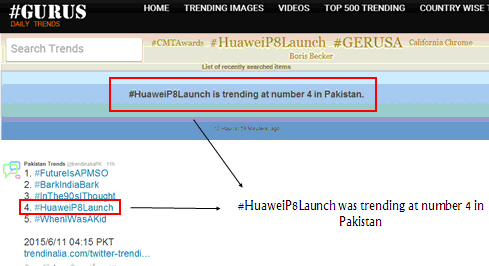 Huawei P8, after receiving outstanding recognition and fame in the international mobile market, it has anchored itself deep in the Pakistan Mobile market as well. Launched in an auspicious and extravagant ceremony, Huawei P8 has captured the eye of all the smart phone users and has hit the market with record sales. The TVC of this smart phone has also played an important role in spreading the word about the unique and exciting features, P8 carries. In the TVC, it has been superbly shown how an avid creative person can enhance and ignite his creative abilities with the help of extra ordinary and pioneering features of Huawei Ascend P8.[ads2]

The social media’s response towards P8 launch was totally exciting, the trend #HuaweiP8Launch ranked among the top trends during the launch, as the fans of Huawei were absolutely thrilled to witness the unveiling of another master piece. Huawei P8 has stood up to the top levels of elegance and innovation with its stylish metal design, unparalleled camera features, powerful processor, latest OS and energy loaded battery.

Huawei’s Marketing Head, Mr. Fraz M. Khan has expressed his excitement about P8 launch in these words,”We are thrilled to receive such an amazing response from Huawei lovers on Ascend P8 launch. Huawei P8 is indeed, a smartphone which shows the manufacturing expertise of our company and this phone will take the creativity to another level because of the features and qualities this smart phone possesses.”

The features which have been provided in this exemplary smart phone are a strong proof of Huawei’s proficiency in making innovative advancements. The features associated with P8’s camera are utterly excellent and professional, which can trigger creative photography streak in any fun loving person. Huawei’s R&D department is surely to be applauded for their extreme vigilance and devotion in the manufacturing of smart phones. The technologies implemented plus the pioneering technologies make Huawei devices stand out among the rest in the world of innovation and technology.