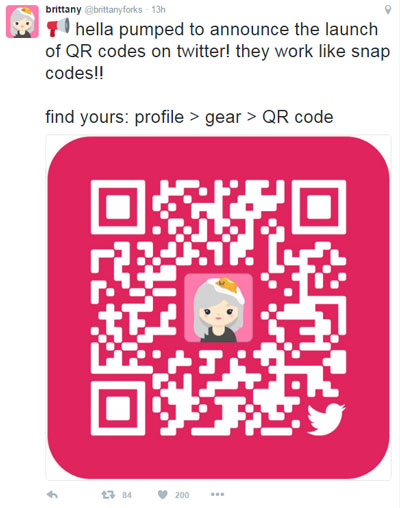 Twitter now trying to capture more users and providing facility to its users to find and follow more accounts easily, introduced QR-Codes features like Snapchat. We know that every social media platform trying to capture more and more users to grow its community. For growth, every social media platform has to provide unique and useful services to users. That’s why a Twitter designer tweet that now users can create their own custom QR-Code to that other peoples can easily follow him. The sample QR-Code with profile picture is shown above as a featured image.

This Twitter feature resemble with Snapchat QR codes and also provide the same kind of functionality with slightly different way. It is very simple and easy process to scan and gets your own QR-code. To find your own code or scan someone else code to follow him/her is not complicated. You have to just follow below steps.

That’s it. It pretty simple and very easy. Now if you have not familiar with snap chat QR code feature then you need to know more about how to use QR code to follow someone.

How to use QR code to follow a profile

As I told you in starting that Twitter follows Snapchat, It means it also follows the same process which snapchat is using in its scan code feature. Here are very easy steps to use scan code.

If you want to follow someone else then simply scan its QR code with your camera, while you scanning its pop up an option to follow this account and you just click yes or OK. It’s done. very simple and easy.

But if you want to share your own QR code, so that someone follows you. Then you have to just take a screenshot of your profile with your camera or built-in screen capturing facility of your device and then simply share it where you want.

Related More: Samsung Next Generation Smartphone will be Foldable

Probably, Twitter hopes this feature will help to grow its community like Snapchat and Instagram. The company expected that launch of this QR code functionality will boost users very soon. Twitter also facing a lot of problems to monetize but can’t able as compared to Facebook and Instagram etc. I personally think Snapchat uses this scan code features because there is now way to find users with names that’s why they used scanning features but on the other hand, Twitter already has a wonderful feature to find different users and also give suggestions based on users interest. Therefore, in my opinion, it might not suitable and handy for twitter as 2nd most widely used social media around the world.