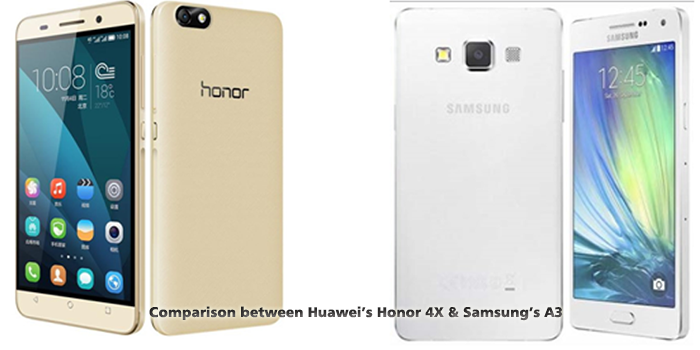 All the prodigies of the Honor series by Huawei launched till date have acclaimed worldwide sky rocketing sales. Their design’s smooth elegance and richness of features has been very well received by the smart phone customers, which is quite evident from the Honor smart phones global reviews.

Utilizing the expertise of the researchers and developers, Huawei has produced such smart phones which possess state of the art technology in them and their exterior covers have been so finely crafted that the instantly capture the eye of the customers.[ads2]

Recently, Huawei has introduced a new member in the Honor series, Honor 4X and this smart phone is certainly continuing the brilliant lineage it belongs to. Given the prices range in contrast to the features Honor 4x carries, let’s compare it competitor smart phone Galaxy A3 by Samsung. Both these smart phone support 4G LTE and Honor 4X is Dual-SIM and A3 carries a single SIM slot.

The exteriors of Honor 4x and Galaxy A3 are both quite attractive fairly, but the Honor 4X’s ergonomic design somewhat provides stronger grip when being used single handedly. Whereas the premium metal design of A3 makes it slightly more desirable than Honor 4X. The rear camera and flash light in Honor 4x are adjacent to each other in the top left corner whereas in A3 the camera is in between the flashlight and the speakers. On the front bottom just below its full touch screen, Galaxy A3 has a button which drives back to Home screen where as in Honor 4X capacitive soft keys (Home, Menu and Back) provide more functionality. Honor 4X carries the Power on/off key and the volume keys on its right side, whereas A3 has the power key on the right and the volume keys on the left panel.

The display screens of smart phones play an important role in their sales because the bigger the better, here Honor 4X takes the lead by carrying a bigger screen then A3 has. Honor 4X has 5.5 inches large HD display screen with 267 PPI and 16 million colors, whereas the A3 has a 4.5 inches qHD super Amoled screen with 245 PPI. Given the price range both these smart phones has aptly manufactured by their companies to exhibit vibrant and colorful display. But certainly Huawei takes the edge because of its affordability and numerous other striking features.

The brains of smart phones are their processors and their efficacy ensures the super performance of the device.  Huawei’s Honor 4X encases 1.2 GHz Octa Core processor with the latest Android 5.0 Lollipop whereas the A3 has 1.2 GHz quad core processor with the previous version Android 4.4 KitKat. Now, it is quite obvious that which of these two smart phones is capable of given ultra smooth performance. It would be Huawei’s Honor 4X most certainly because of more efficient processor and modern Android OS with Huawei’s fine EMUI 3.0 management system.[ads1]

Honor 4X carries 2GB RAM and 8GB ROM and its memory is expandable up to 32 GB whereas Galaxy A3 has 1.5GB RAM and 16 GB ROM, memory expandable up to 64 GB. Well, here A3 takes the lead from Honor 4X with respect to the data storage capacity, but whereas the temporary memory is concerned Honor 4X has a bigger RAM than A3  which means that it would be able to deliver a better online streaming experience.

Honor 4X has a super high quality primary camera in comparison to Galaxy A3. The front camera of both these smart phones is of 5MP but the primary camera of Honor 4X is 13 MPwhereas that of A3 is 8MP. With the outclass camera features that are available with Honor 4X’s camera such as ultra snap shot, off screen photo mode and numerous other plus its ability to capture pictures in 0.6s, it certainly is a tempting feature.

Talking about the power house, the battery of smart phones, Honor 4X has a super heavy battery in comparison to A3. The battery power of Honor 4X is 3000mAh, and that of Galaxy A3 is 1900mAh. It is totally apparent from the aforementioned feature that Huawei’s Honor 4X is a lot more capable than A3 to give long lasting fun filled experience. No matter, how long and work loaded day the user would have, Honor 4X would be available all the time without the constant nagging for recharge.

Finally, let’s compare the prices at which these smart phone devices are available. Huawei has launched Honor 4X for Rs. 25,800/- only, whereas Samsung Galaxy A3 is available for Rs. 29,999/-. Not too big, but still the given price difference means a lot when it comes to the features these smart phones are offering.